…accusing each other for referring patients to private hospitals

The Tribune, a premier English daily, on January 12 reported from Jalandhar that all was not good at the Civil Hospital Jalandhar trauma centre. Caught up in a slugfest, the doctors and nursing staff were at loggerheads, accusing each other of referring patients to private hospitals here. 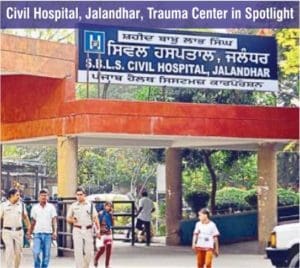 The internecine feud between doctors and nursing staff at the Civil Hospital trauma centre came to light over when some members of the nursing staff were shifted to some other wards of the hospital.

The doctors and nurses here have leveled serious allegations against each other over ‘referring’ trauma centre patients to certain private hospitals here. Doctors claim “Out of the 100 patients, 80 turning up for treatment at the trauma centre are being referred to some other hospitals here”.

On the basis of the allegations of referring patients to private hospitals, the SMO shifted three nurses posted at the trauma centre, to some other wards of the hospital.

One of the nurses shifted wrote to the Medical Superintendent (MS), alleging she was being targeted for no fault of her. This is what she has to say about the development: “The SMO is making personal allegations about my salary and causing a great deal of mental trauma to me.”

Pooja Samra, another staff nurse, said: “I am among the 40 nurses appointed to serve at the trauma unit in 2009. We have several years’ of experience of dealing with trauma patients to their satisfaction. I was shifted from the ward on January 1 without serving a notice. I have been put on ‘relieving’ duty in the new ward, which amounts to punishment. A wrong notion about my ‘hefty’ salary is also being spread out to target me. I should be shifted back to the parent ward”

The newspaper report further added that, on January 9, Samra submitted a complaint to the MS, alleging she was being harassed by SMO, Dr Chanjeev.

Taking umbrage of the allegations, the MS constituted a team of two SMOs, which has asked to submit the report within a week.