In order to combat the corona virus in Himachal Pradesh, cough conners have been set up in government hospitals at Dharamshala, Tanda and Palampur so that if a patient suspected to be infected with the deadly virus could be offered treatment promptly. 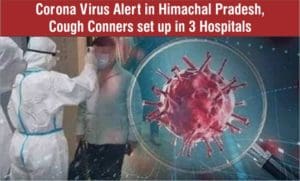 While in China, being the epicenter of the deadly virus, which is battling the Corona virus, an alert has been sounded in Himachal Pradesh, including Kangra district, to take on the zombie of corona virus. To meet a given situation cough conners have been set up at three major hospitals, including zonal Hospital, Dharamshala, Tanda Medical College and Hospital and Palampur Hospital. The government has also issued an advisory to the health department in this regard through which the staff were being updated about the corona virus.

No detection of corona virus so far

According to the information available, not even a single case of corona virus positive has been detected by far in the country as a whole, yet precautionary steps are being taken in this regard, with the department concerned on its toes to deal with any eventuality. According to the department, all combative measures are in place, while cough conners have been set up to offer speedy and spot treatment to anyone, if tested positive.

This is what CMO Kangra has to say?

The chief medical officer (CMO),  Kangra, Doctor Gurshadan Gupta said that the corona virus came to light in December last year, with most of the cases reported from China. He added that by far not even a single incident of coronavirus was detected positive in India. Corona is a viral infection and the government has been receiving guidelines and advisories from the world health organisation (WHO), and the staff concerned are being updated on a regular basis.

All precautions in place to take on any eventuality

Cough conners have been set up at government hospitals at Dharamshala, Tanda and Palampur so that any patient suspected to be infected with the virus could be offered immediate treatment. Even as there has not been a single incident of corona virus in India yet, an alert has been sounded in the state of Himachal Pradesh where staff are being updated as per the guidelines issued by the union and State government.