Prior to her elevation to the prestigious present posting as the ADG (MNS), Major General Roach was Principal Matron, Army Hospital Research and Referral, an apex quaternary care hospital run by the Indian Armed Forces. She was promoted to the rank of Major General in June this year. 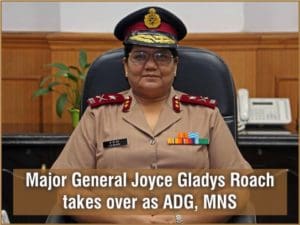 Originally hailing from Kadukutty village, under Thrissur district of Kerala, Major General Roach was born and brought up in Pune. She was commissioned into MNS on December 30, 1981.

An alumnus of the Command Hospital Air Force, Bangalore, she pursued her midwifery training from the Military Hospital Jabalpur, and completed her Class I OT course from the Armed Forces Medical College, Pune, in 1988 and earned her B. Sc. (N) degree from the IGNOU, in 2004.

With and illustrious career spanning over 37 years behind her, Major General Roach has held several coveted appointments, both in clinical nursing and administration as well. Her eventful stints with various Armed Forces Hospitals, including the Counter Insurgency Areas in Northern Command, speak volumes of her vast experience and expertise in adept handling of the jobs assigned to her. She is well known for her excellent Operation Theatre Manager skills.

Major General Roach is the first and only OT Matron to be posted in the high altitudes, 153 GH, to be precise, from April 1988 to March 1990. She has also served as a Cardio Thoracic OT Matron for more than 15 years.

As Principal Matron of some top-rung hospitals, like the INHS Sanjivani and CH (SC), Pune, and Brig MNS of HQ Eastern Command, Major General Roach’s forte was quality patient care and excellent nursing care practices. She has a flair for adapting to the emerging trends and taking care of the requirements to target organisational goals. She accentuates the significance of quality in Nursing Education and practice and yearns for contributing comprehensively to planning/training of Army College nursing students as well as the paramedical personnel of the Armed Forces.