Acute shortage of nursing staff: patients cry for due care 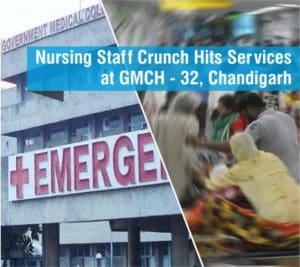 A report in Indian Express dated January 10, 2020, said that patients were not getting due medical care at Govt Medical College and hospital-32 due to an acute shortage of nursing staff.

Sources say the hospital has a sanctioned strength of 774 nursing staff, against which only 178 vacancies were declared opened in October 2018, out of which 97 nurses were finally hired, saying that more than 50 have already resigned or shifted to other wards.

The report says that due to the shortage of staff, patients in the emergency ward were bearing the brunt when left unattended.

“This is why we insist upon patients’ kin to stay back with their patients to ensure that they are not left to suffer due to lack of nursing care” an office-bearer of the Nursing Welfare Association (NWA) at GMCH 32, said on condition of anonymity.

“The staff crunch is due to the fact that we are overworked and lowly or underpaid. We get paid at par with our Punjab Government counterparts, which is far lesser than what the nursing staff in central government or other reputed hospitals, such as the PGIMER, get” said a member of the staff.

The NWA said it shot off a series of letters to the hospital authorities, the Punjab Health Department, Chandigarh MP, Kirron Kher, and to the National Commission for Women, flagging the issue of staff crunch and the difficulties being faced by the female nursing staff, but to avail.

The report added the shortfall has led the nursing staff to face hardships in availing themselves of their child-care leave (CCL). “We have examples where members of the nursing staff having small kids, have to make fervent appeals to Nursing Staff Superintendent, for leave, but in vain apparently due to the shortage of staff, which tantamount to a great mental torture”, lamented a member of the staff, who wished to be anonymous for obvious reasons.

The nursing staffer further added that the crux of the problem being faced by the Nursing Staff is the pay disparity. “Since our pay scales are far lower than those of the central government employees and our state counterparts are drawing, the patients are left to suffer. Promotions are due for a long time now, forcing nursing staff to move out in search of greener pastures elsewhere.”

There are around 600 nursing staff tasked with attending 1200 beds, excluding those who are, under compulsion, sharing a bed with other patients due to lack of adequate infrastructure. On the other hand, the PGIMER has over 2500 nursing staff for a total of 2000 beds, and the AIIMS, New Delhi has 4500 with around 2300 beds to take care of, as per the data retrieved via RTI by an official of the hospital. A nurse in charge of a labor room here claimed that two nurses were taking care of an average of 60 patients at a time.

While the Nursing Superintendent at GMCH 32, refused to comment, the official spokesperson stated “The authorities concerned have always been trying to fill in the vacant posts in a time-barred manner to meet the staff crunch”

“Yes, many nurses have resigned on their own, for one or the other reasons. They will naturally do so when better opportunities are available elsewhere. However, there is no additional pressure on the Nursing Staff here as being projected. They have been asked to perform their assigned duty only,” the spokesperson said.